They shall grow not old – WW1 Genealogy

‘(The study of) the history of the past and present members of a family or families’ is in equal measure challenging, rewarding, disappointing, enlightening, frustrating, compelling, addictive, endless. If you deign to dip your toe in the murky waters of your family’s history be prepared to be drawn in; once in the family history maze, you’ll never get out.

I entered our family history maze (both mine and my wife’s) in 1990 and in those early years I made many research methodology mistakes (e.g. starting with what I thought was the earliest known relative instead of building from the latest). Sadly, no Danny Dyer like link to royalty was found although I did find that my 13 x Great Grandfather John Finch (b. about 1548 Eccleston, Lancashire) was a Blessed Martyr of the Catholic Church. He was tried and found guilty during Henry VIIIs Reformation for harbouring and aiding Catholic priests. On 20 April 1584 he was executed at Lancaster and he was later beatified in 1929 by Pope Pius XI.

Having got back down both the branches as far as I could, in 2005 I started researching the World War 1 service history of my wife’s Great Grandfather, Driver Harry Jarman of C Battery the 277th Army Brigade Royal Field Artillery. Thankfully he had a service record and referring to this and the unit war diary I have been able to map his 1918 withdrawal route during the German Operation MICHAEL spring offensive, through to offensive operations in the vicinity of Amiens and Arras and his evacuation through illness in October 1918 to Deal. 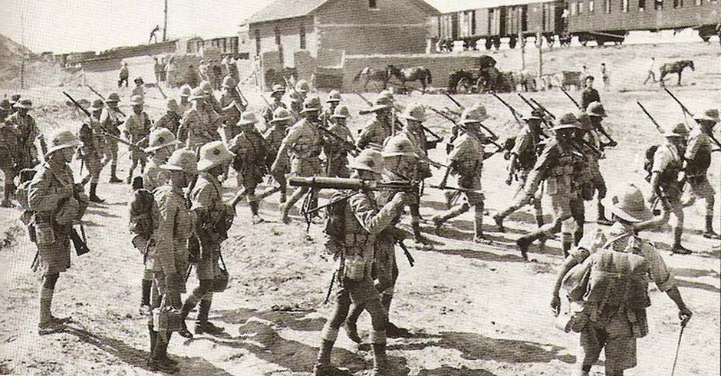 In 2014, on the 100th anniversary of the start of the Great War, I then decided to trawl back down through the rest of our Great Grandfathers, Great Uncles and Cousins to see who else had served and, where records allowed, chart their individual WW1 journeys. To date the records of 23 WW1 relatives have been uncovered including that of my own Great Grandfather, Private William Wilshaw of the North Staffordshire Regiment. Along with his brother and nephew he saw active service in Gallipoli and Mesopotamia before being wounded in the lung during the Relief of Al-Kut. He was then evacuated to India and the British Army cantonment of Dagshai in the Himalayan foothills. For me it is a little ironic and not a small coincidence that when I served in Iraq I was based near Al-Kut where he sustained his wound and also in Basra where he was evacuated from. Back in 1981 I was part of a British Army climbing team that managed to make the first ascent of KR4, a mountain in the Koa Rong range of the Himachal Pradesh. On our way up and down to and from the mountain we staged in at John Banon’s hotel in Manali. On the way back from Manali we stopped off in Simla en-route for Delhi. Our subsequent route south from Simla took us past Dagshai; If only I’d know then what I know now.

For anyone interested in researching WW1 relatives I have outlined some sources of reference below. Should any reader require further help please do not hesitate to contact me and I’d be only too happy to try and source any associated documentation where it is available on-line.

4 key online sources of information are:

More than nine million men and women are estimated to have served in the British armed forces during the First World War. Many of the surviving service records from this period can be found in The National Archives (TNA), and can be used for tracing an ancestor who fought in the Great War. Unfortunately, more than half of these service records were destroyed in September 1940, when a German bombing raid struck the War Office repository in Arnside Street, London. However, an estimated 2.8 million service records survived the bombing or were reconstructed from the surviving records. This means that there is a roughly 40% chance of finding the service record of a soldier who was discharged at some time between 1914 and 1920.

Although they rarely mention ordinary soldiers by name (they do Officers) War Diaries (TNA catalogue references WO 95 and WO 154) contain daily records for the units in which they served. Further basic information can also be found in the lists of campaign and gallantry medals.

The Medal Rolls were created as lists of those individuals entitled to one or more campaign medals. If you do not know which military unit the individual you are researching was serving with, it is advisable to consult the indices for the Medal Rolls first. This should be the best way of confirming the unit (or units in many cases) with which an individual saw service in the First World War. The indices are formed by the Medal Index Cards.

Note that the cards filled in by the Army Medal Office varied slightly from time to time and therefore the information recorded on a card may vary slightly. An example of a Medal Index Card is pictured.  A few years ago the Ministry of Defence was looking to remove the Medal Index Cards from its secure storage area. It consisted of several million cards in many metal filing cabinets. There was a danger that the cards might be destroyed. This would have been a tragedy. Thanks to The Western Front Association and other concerned individuals this invaluable source of information, and memorial to the men and women who served in the First World War was rescued. The Medal Index Cards are now stored in a safe and secure location and furthermore both sides of every card have been electronically scanned in high resolution colour and are now available online.

Records of the Silver War Badge

The Silver War Badge was awarded to men who were honourably discharged under certain King’s Regulations. It was also awarded in retrospect: that is, to men discharged in 1914 or 1915 who otherwise met the criteria. The Silver War Badge, sometimes wrongly referred to as the Silver Wound Badge, was instituted from 12 September 1916 under Army Order 316. It is a circular badge with the legend “For King and Empire – Services Rendered” surrounding the King George V cypher. The badge had a pin for wear as a brooch. If the service record is now lost the silver war badge roll may be the only remaining evidence of service for some soldiers. The roll can be searched here.

The London Gazette: Awards and Citations

A lot of these records are also available if you have an ‘Ancestry’ or similar genealogy application account.

Best of luck with your research endeavours and please do give me a shout if you want help.